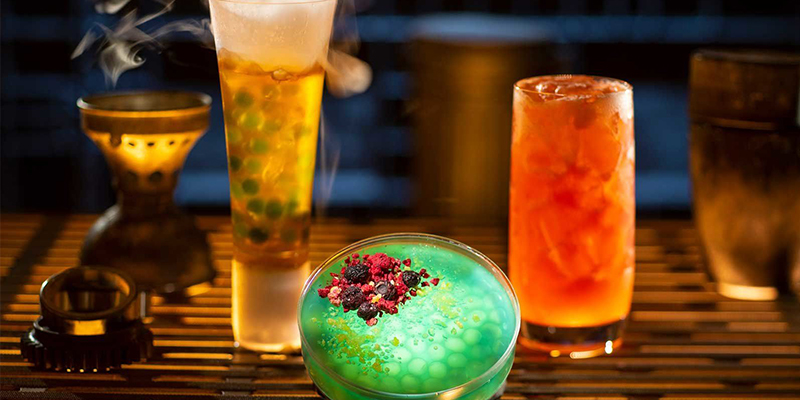 If you’re craving a cocktail at the happiest place on earth, don’t worry. we’ve got you covered.

The big question of many adults visiting Disneyland is does Disneyland sell alcohol? Yes, it does, which is a recent (as of May 2019) new addition to its classic theme park. It was very important for founder Walt Disney to create an amusement park for all to enjoy without the presence of alcohol. He felt, for marketing purposes, he didn’t want to taint the family image he was trying to exemplify as well as disrupt the family atmosphere with intoxicated guests.

In a Saturday Evening Post article from 1956, Walt Disney answered the “Disneyland doesn’t sell any alcohol?” question with “No liquor, no beer, nothing because that brings in a rowdy element. That brings in people we don’t want and I feel they don’t need it.” So Walt pretty much put the nix on alcohol at Disneyland and so it goes Disneyland has been alcohol free since its opening on July 17, 1955.

But that was then and this is now. As of May 31, 2019 which is the long awaited opening date of Star Wars: Galaxy’s Edge, the new land at Disneyland serving up all things Star Wars, will finally have it’s first ever bar to sell alcohol— Oga’s Cantina.

Where in the Park Does Disneyland Sell Alcohol?

Only one place currently inside Disneyland will serve alcohol and that is Oga’s Cantina. The Star Wars-inspired pub will feature a long list of cleverly crafted concoctions made with alcohol for the adults as well as Star Wars-themed kid friendly beverages. The bar will also offer both wine and beer on tap.

The bar menu is diverse and has something for every type of drinker. Here is a rundown of the cocktails offered when Oga’s Cantina first opened in May 2019:

T-16 Skyhopper is made with Tito’s Handmade Vodka, Bols Melon Liqueur, Kiwi, and half & half.

While Star Wars Land is currently the only public place where alcohol is sold inside Disneyland Park there is one other secret place inside the park where you can get alcohol – but there’s a catch!

The restaurant is not just a place to wine and dine, but the ultimate fan experience with relics from Disney films and from Walt Disney’s personal vault. It was the first place and only place (until the recent opening of Star Wars Land) to ever serve alcohol within the Disneyland Park. The park has held a full liquor license ever since the Club’s opening in 1967, which means the license has been valid throughout the park, but they never implemented it anywhere else except for private events.

Although Club 33 is not opened to the public — don’t worry! There’s plenty (and I mean plenty!) of other places outside Disneyland (that are still part of Disney) where you can get your drink on.

This is where it all began — Disney on the Rocks, Drunk Disney, Mai Tai Mickey TimeAfter its opening on February 8, 2001, Disney’s California Adventure Park became the go-to park for adults to enjoy all the benefits of Disneyland, but with the added perk of alcohol. From its inception, the park was designed to inspire the California lifestyle and broad topography including wine country. Many of the restaurants and bars within California Adventure Park feature quality wines from Napa Valley and the surrounding wine regions. Restaurants and cantinas inspired by Southern California’s diverse food scene, especially south of the border, make for tempting bar menus that include margaritas, Mexican beers, and sangria. Here are some of the places within Disney’s California Adventures where you can get alcohol.

Wine Country Trattoria: This restaurant features the best of both wine worlds — California and Italy. Here, wine aficionados can have their choice of two different wine flights — Tour of Italy and California Wine Country. The Tour of Italy flight has premium tastings of different Italian varietals including Chianti and Pinot Grigio. The California Wine Country flight features wines from Napa and the Russian River Valley. Their menu also offers sangria and a selection of bottled beers.

Mendocino Terrace: This patio wine bar includes a wine expert to walk you through the best in California (and international) wines. You’ll find one of the largest selection of wines at Disneyland Parks including white wine from California, France, Germany, and New Zealand; Rosé and sparkling wines from Italy, and red wines and ports from Portugal, Argentina, and Paso Robles. Italian cold cuts and California inspired cheese plate are the perfect light bites while you drink.

Sonoma Terrace: Two words — Strawberry Frosé. This wine-centered cafe features the “it” drink of the summer month, a frozen rosé slushy drink with strawberries is a great “cool off” that will give you a good buzz for the rest of your day. You’ll also find sparkling wine and rosé on the menu, bottled and draft beer, and cocktails such as the Sparkling Greyhound.

Rita’s Baja Blenders: This quick serve stand has ready made frozen margaritas that you can take on-the-go. Lemon-lime, strawberry, and premium Grand Marnier margaritas are just a few of the selections offered. There are also non-alcoholic versions of these tasty cocktails as well.

Lamplight Lounge (formerly Ariel’s Grotto) is a themed dining lounge, celebrating the imagination of Pixar’s films. It serves up some of the best food and drink inside the park. Indulge in a Cinnamon Toast Cocktail made with Stoli Vanilla Vodka, Rumchata and their unique ingredient — Cinnamon Cereal-infused milk. Mimosa Flights and Beermosas are also a popular pick during brunch at Disney. Themed dining lounge celebrating the imagination from Pixar’s animated films.

Hollywood Lounge: Is a drink and snack stand where you can not only drink Guardians of the Galaxy-themed cocktails, but you can also get the very social media popular Groot-shaped sourdough bread. The cocktails are sweet, but delicious like the Pineapple Margaritas, Vodka and Blue Raspberry Lemonade, and ‘Saving the Galaxy’ — Champagne and Lavender Lemonade.

Cocina Cucamonga Mexican Grill: With a shaded patio that looks over the Pacific Wharf waterfront, this is one of the top places to nibble on gourmet tacos and throwback a couple of cervezas or quench your thirst with their special seasonal margarita.

Bayside Brews: This easy breezy quick service spot in the Paradise Gardens area is your best bet if you enjoy a a frothy beer. Choose from a selection of IPAs, Belgian beers, hard apple cider, Bavarian-style beer, or a pale lager. Tastes best with a Mickey-shaped hand made fresh pretzel.

Alfresco Tasting Terrace: Come for a glass, stay for a bottle. This is one of the only places inside a park where you can order a bottle of wine. The wine list is made up of wines from Disney’s family of wine and wineries. You’ll find such specialty wines as Kurt Russell’s GoGi wines, Lasseter Family Wine (from Pixar), and Chappellet Signature Cabernet. Their cocktails are also as fun as the park like Apricot Glow-tini, Fun Wheel, and Magical Star Cocktail.

You won’t have to veer too far outside Disneyland to find Disney’s Grand California Hotel which is tucked inside Downtown Disney District and connected to California Adventures Park. Within the hotel you’ll find two places to relax and have an adult beverage — Napa Rose Restaurant & Lounge and Hearthstone Lounge.  Both of these spots have the most extensive wine, beer, and cocktail list of any place in or out of the park. A lot of the speciality cocktails you’ll find inside Disney’s California Adventures, you can find here and no park admission is required.

Downtown Disney is the premier dining and shopping district for Disneyland. This outdoor mall requires no park admission, so you can enjoy a Disneyland cocktail without breaking the bank. There are plenty of places to find alcohol at Downtown Disney including these favorites:

Can I bring alcohol into Disneyland Park?

Alcoholic beverages of any kind are not allowed inside Disneyland park and all personal bags are subject to inspection prior to entering.

What Type of Alcoholic Beverages Does Disneyland Serve?

Disneyland and the surrounding areas of the park serve beer, wine, and alcoholic spirits. You can find a wide assortment of different types of alcoholic beverages at Disneyland and at the next door California Adventures and Downtown Disney District.

Will Disneyland expand their alcohol offerings throughout the park?

Disneyland (into the future) : With the opening of Oga’s Cantina, Disneyland hopes to expand their alcohol program in other areas of the park. One of the largest revenue generators for Disneyland Parks is serving alcohol. “Just as our theme parks have evolved since Disneyland opened, so have our guests’ desires,” Disneyland spokeswoman Liz Jaeger told the Los Angeles Times. “Providing a memorable guest experience that exceeds our guests’ expectation is very much the essence of what Walt Disney set out to achieve, and we feel that Star Wars Galaxy’s Edge will offer that kind of experience.”