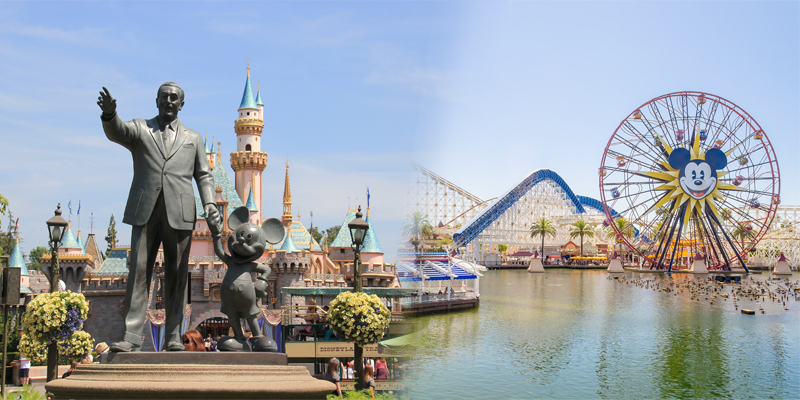 Let’s start this post out with a little preface: I love both Disneyland and California Adventure equally. They are two of the most fun parks out there, with both having their own unique perks and quirks. You honestly cannot go wrong with either venue, in my opinion, however there are some pretty stark differences between the two that may or may not gel well with your personal vacation vibe, depending on what sort of trip you are shooting for. Let’s take a look at some of the differences between the two and figure out just how they compare.

Disneyland vs California Adventure: Which is Better?

For one thing, Disneyland is slightly bigger but draws in roughly double the visitors. Disneyland is around eighty five acres and sees around twenty million visitors or more each year according to a 2017 study; California Adventure, on the other hand, is only thirteen acres smaller at seventy two but only has around half the visitors, making it significantly less packed. If you are not a fan of the intense Disney crowds, California Adventure just might be the park for you.

If you have small children coming with you, you may want to opt for Disneyland over California Adventure. California Adventure is amazing for older kids who love thrill rides but for the little ones, Disneyland is probably a bit more their speed. They can experience all of their Disney pals in a fun, family friendly atmosphere full of sugary treats and lots of lowkey, giggle inducing rides. Grown ups can enjoy both parks, as there is an endless array of events, rides, and stands dedicated to keeping the adults just as content at the Happiest Place on Earth as their kiddos, but if you have already been to Disneyland or are looking for something a little more lowkey, California Adventure might be the way to go.

The vibes of the parks are completely different. With Disneyland, everything is about whimsy and magic. The world is bright, the air is aromatic, and everything is a larger than life, full of color and fun. California Adventure favors a more historic route, featuring settings and rides that focus on the past and present of Disney and California. The famed Storytellers statue which depicts Walt Disney arriving in Los Angeles with Mickey in tow can be found here, as well as other educational tidbits. Of course, there is still an incredible air of absolute magic within California Adventure; it is simply a different type of enchantment all together.

If you love classic Disney movies, Disneyland will be your own personal Heaven. You can see bits from movies like Peter Pan, Snow White, Dumbo, and Alice in Wonderland in all their glory. California Adventure favors more modern movies like Cars, Guardians of the Galaxy, and Toy Story but still works in a bit of nostalgic fun with tributes to the Little Mermaid and a few other older films. You honestly cannot go wrong with either choice; a good way to decide is to simply let your movie preference lead you!

Both parks have an incredible selection of big name rides and attractions. Seriously, while planning our first vacation to Disneyland it got a bit overwhelming deciding what we were going to try to do. There’s just so much fun stuff! The Haunted Mansion, Splash Mountain, the Matterhorn, and the classic family fun adventure that is “It’s a Small World” are all hot tourist attractions in the park. Fun fact: the Pirates of the Caribbean movie franchise was actually inspired by a ride of the same name in the park! Someone looked at the ride one day and thought, “Hey! That’d make a fantastic film!” and the rest is history.

California Adventure offers some incredible popular attractions too. Thrill seekers flock to the Soarin’ Over California ride for some adrenaline pumping fun while families adore the Radiator Springs Racers. Other fun options include the Twilight Zone Tower, Grizzly River Run, and Goofy’s Sky School. Your little mermaid will adore the Under the Sea: Journey of the Little Mermaid dark ride that traces the story of Ariel and her friends, too! You can also take a trip to see Mike, Sully, and Boo from Monsters, Inc at the Monsters, Inc Mike and Sully to the Rescue ride.

Can I buy Alcohol at Disneyland and California Adventure?

Disneyland has a fairly strict no alcohol policy and you will not find liquor sold anywhere within the park. Club 33 is an exception, however this club isn’t open to the public. This rule matches up with the “kid friendly” vibe the park shoots for. If you want to drink while you are out, California Adventure serves alcohol at several different kiosks and restaurants, including one stand that carries beer on the boardwalk. That being said, both parks will remove rowdy visitors if they become too inebriated so take it slow and make sure you are good to enjoy the entire visit. You are paying a pretty penny so getting kicked out would not be the best vacation ender!

This will all change when Disneyland opens up their Star Wars themed cantina.

Price wise, there is not much difference at all between the two parks. For a regular demand day at Disneyland, tickets are around one hundred and seventeen dollars for a single day pass. California Adventure is just seven dollars less per single regular demand day pass at one hundred and ten dollars. You will pay roughly the same amount no matter where you go, making them rather comparable. If you want to try to visit both parks, a park hopper pass is an amazing choice. The park hopper gives clearance to both Disneyland and California Adventure at a discounted price of one hundred and ninety nine dollars per single regular demand day.  You save twenty eight dollars by opting for this option and can cross back and forth between the parks multiple times as the day goes on. Be warned though, these prices are subject to change as demand increases or decrease through the year; always check ahead!

A Bit of A Historical Perspective

Disneyland is a lot older than California Adventure. Opening in 1951, critics swore Disneyland would be a massive flop and were shocked when the park’s one millionth visitor crossed through the gates just seven weeks later. An instant success, Disneyland has become one of the top vacation destinations in the world for families, couples and groups, and solo visitors alike due to its real life magical charms. California Adventure was opened decades later in 2001 as a more California culture based venture but was eventually updated to host more Disney whimsy while still retaining much of its interesting historical background.

Disneyland has eight themed areas: Main Street USA, Tomorrowland, Mickey’s Toontown, Frontierland, Critter Country, New Orleans Square, Adventureland, and Fantasyland and focus on beloved Disney characters and enchanting themes that are fun for all ages. California Adventure takes a different approach with their seven areas, all of which are themed after different areas in California save for Car’s Land and “A Bug’s Land”, which follows one of my personal favorite Disney movies, A Bug’s Life. Buena Vista Street, Grizzly Peak, Paradise Pier, Hollywoodland, Car’s Land, Pacific Wharf, and ‘A Bug’s Land’ are all amazing options that are a little more “grown up”.

Are the rules of the parks different?

In general, no. Both Disneyland and California Adventure both use the same base set of rules to ensure the safety of their guests. You can find them here. These rules are in place to make sure that you are able to have fun without worrying about any sort of risk or other concern; Disneyland and California Adventure are both fairly relaxed atmospherically but you should absolutely take the rules seriously and always abide by them to protect yourself and those enjoying the park around you.

Do both parks offer special dining options for those with dietary requests or requirements?

They certainly do! Disney tries to be as inclusive as possible. You can find something delicious no matter what allergy or preference you may have. Lactose, nut, egg, and other food allergens are carefully controlled to ensure patron safety within the parks. Vegans, kosher, and vegetarian guests can also still dine freely and can request menu items be made with alternative ingredients that fit their diet. You certainly will not miss out at Disney, especially since you can make any dietary requests while making your reservation and streamline the entire process! Plus, almost everything is kid friendly, as well, making dining with even the pickiest little ones a breeze.

What is the World of Color I keep hearing about?

If you are looking at booking a Disneyland or California Adventure vacation, chances are you have heard about the World of Color. A super popular California Adventure attraction, the World of Color is described by Disney as a “kaleidoscope of color and emotion”. Viewers stand in awe as scenes and memories from famous Disney and Pixar films are projected onto a massive fountain that sprays over nineteen thousand square feet of water into the air. An incredible celebration of Disney storytelling featuring classic and new favorites, the show is absolute breathtaking. You can grab tickets at a couple of different kiosks within the park; ask a cast member at the time of your arrival to be pointed in the right direction. You definitely do not want to miss out on this! It was the highlight of my last trip.